The beginning of First United Evangelical Lutheran Church of Hammond can be credited to the interest of Dr. Homer E. Turney, former president of the Indiana Synod, ULCA. Dr. Turney was present on April 9th, 1939, when 104 people, interested in establishing a mission in the Hammond area, organized the parish under the Indiana Synod of the United Lutheran Church in America. Rev. Turney delivered the sermon and performed the first infant baptism, in conjunction with the worship service that marked the occasion. At that time, this was the largest and oldest body of Lutherans in the United States, originally founded in the year 1748.

A temporary meeting place was arranged in the American Legion Home, Post 330 at Ruth and Gulf Streets, near the Illinois-Indiana State line. The temporary site, however, was the Church’s home for the next eight years due to building restrictions imposed by the Federal Civilian Protection Administration and the scarcity of building materials during and after World War II.

Dr. Turney made arrangements with Dr. H. Grady Davis of Chicago Lutheran Theological Seminary to act as supply pastor until the congregation was able to secure a permanent pastor. On August 6, 1939 the Rev. Paul J. Renz was installed as the Mission’s first regular pastor.

Thirty women of the Church met on April 10th, 1939 and formed the Women’s Auxiliary. The following Sunday twenty-five persons attended the first meeting of the Sunday school. The congregation was approved as a corporation under the laws of the State of Indiana on April 15, 1940. 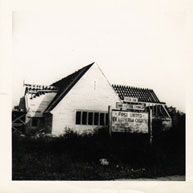 A building site for the congregation’s permanent church home, a 140 x 200 foot lot fronting on 6705 Hohman Avenue, was purchased on June 12th, 1940 for a sum of $3,750. On April 26th, 1948, ground-breaking services were held for the erection of the first unit of the congregation’s proposed building program. Dedication services for the $100,000 chapel-parish hall were held on December 12th, 1948. It was constructed of a combination of Indiana limestone and cypress timbers, and had small, leaded windows to carry out the rustic Cotswold design. The original structure included the chapel, educational rooms, an office, and the pastor’s study. Modern folding doors separated the classrooms, but were opened to accommodate 425 persons for services.

In 1952 the congregation, visualizing the need for expansion, purchased the remaining land adjacent to the Church property. The residential building located on the property served as the Church parsonage. After it was renovated and modernized, the parsonage basement was used to supplement parish educations facilities.

During the pastorate of Rev. Edward D. Driscoll (1953-1963), a $250,000 structure was added to the first unit, completing the Church building as it stands today. The ground-breaking service for the new structure was held on May 31st, 1959, followed by a cornerstone laying ceremony on August 30th of the same year. Dedication of the new “Unit 2 Nave building” was held on May 15th, 1960. The construction of a passageway to the educational unit and the surfacing of the parking lots were also completed the same year.

On May 13th, 1962, the annual convention of the Indiana Synod was held at First United. There was, adopted and approved, a resolution setting forth a joint agreement of consolidation of the Indiana Synod and the Kentucky-Tennessee Synod, United Lutheran Church in America, to form a new corporation to be known as the Indiana-Kentucky Synod of the Lutheran Church in America, Inc. On June 28th, 1962, at a constituted convention held in Detroit Michigan, the merger of four Lutheran church bodies was approved and consummated. On September 17, 1962, at a constituting convention held at St. Marks Lutheran Church, Indianapolis, Indiana, the joint agreement of consolidation was approved by the delegates of the Indiana and Kentucky-Tennessee Synods. 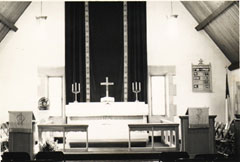 The altar was given to the Church by Mrs. Frieda Krueger in 1964, the congregation’s 25th anniversary year, in memory of her husband Mr. Ben Krueger. It was made of imported Italian yellow brocatel Sienna marble, with a symbol of the phoenix bird embossed on the front. Other memorials and gifts of appointments for the altar furnished it in the Lutheran tradition. Between 1965 and 1970, the educational facilities at First United were refurbished and modernized.

During the pastorate of Rev. Albert R. Swasko (1965-1979), committee structures were enhanced at First United Lutheran. In 1967, the Senior Friendship Club was organized in response to increasing opportunities and need for an expanded ministry among the older members of the Church. A year later, the Young Adults Group was founded at First United and immediately recognized as a “wonderful helping crew”. The Young Adults met for monthly discussions on religious and secular subjects; frequently they delivered flowers and caroled to shut-ins. The duties of the Evangelism Committee were expanded to include training sessions, survey completion, letter-writing, and the provision of literature. The Christian Education Committee provided training and education for the Sunday school program teachers. The Christian service activities of the women of the Church and the Church’s Social Ministry Committee included an amazing array of tasks including the production of quilts and blankets for Lutheran World Relief, the provision of tutors for the Calumet Literary Council, and support for the Hammond Meals-on-Wheels Project.